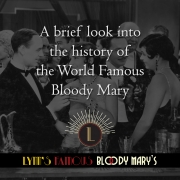 The Bloody Mary is one of the most classic and most easily recognized drinks on a cocktail menu. It has been around for decades and in the U.S. at least, is most commonly ordered in the morning during breakfast. Although it is easy to spot the drink on any menu, it’s not so easy to trace back the true origins of the drink or its name.

History shows there are a few different people claiming to have invented the modern version of the classic cocktail, but most sources attribute the drink’s recipe to a man named Ferdinand Petiot.  As the story goes, it was the early 1920’s and a  New York style bar called Harry’s opened up on the Parisian streets and immediately garnered a lot of attention. This bar earned recognition at the same time Prohibition was happening in America. Liquor-starved Americans flocked to this new bar and loved it because it felt a little bit like home. People that were escaping the Russian Revolution also began to flock to the bar and with them, they brought vodka and caviar. According to his granddaughter, Ferdinand said he began experimenting with the vodka spirit, but he found it to be tasteless and boring. Coincidentally, around the same time,  he also discovered American canned tomato juice. On a whim, he mixed these two liquids together, 50% vodka and 50% tomato Juice. Thus creating the very first version of what is now called the Bloody Mary, which is a far more appetizing name than the original name, Bucket of Blood. That name is said to be coined by a visiting American entertainer named Roy Barton. Once the 18th Amendment had been repealed, which prevented the importing and exporting of intoxicating liquors,  the tomato and vodka drink made its way overseas to New York City. Except, this time it had a new name, the Red Snapper. It quickly became known and popularized as a hangover cure.

There is much dispute over where the name “Bloody Mary”  really came from. Some bars are believed to have used the name in reference to Mary Tudor of England and Ireland, known for her bloody reign against the Protestants. However, a 1939 ad for Smirnoff vodka claims that the entertainer George Jessel had named the drink after his friend Mary Geraghty. Other people firmly believe it was named after the Hollywood star Mary Pickford.

Regardless of the true origin of the name, recipes under the name Bloody Mary date back to 1946 in print at least. This zesty drink continued to spread all over the country and the world. Ernest Hemingway claims to have introduced the drink to Hong Kong. Bars in Chicago claim ownership of the celery stick addition, meant to act as a flavorful stirring stick. There are many versions of the Blood mary as well. It seems everyone has tried to create their own “perfect” version of the classic drink. These days you will find all sorts of versions that even include other liquors such as Tequila (Blood Maria), Gin (Spice Red Snapper) and even Whiskey (Brown Mary or Whiskey Mary). You can find new recipes and names in just about every country.

The exact recipe has definitely been tweaked a little over the years,  it varies from region to region and some bars might even add extra twists or throw slices of bacon in the mix to make it their own. Lynn’s Famous Gourmet Bloody Mary pre-mix is an Ode’ to the history of the world-famous cocktail and the foundation of the perfect drink you can make yourself at home. So, instead of going out to your local bar and spending a day’s pay, why not drink your perfect Bloody Mary in the comfort of your living room surrounded by the people you love the most.

Scroll to top
We use cookies on our website to give you the most relevant experience by remembering your preferences and repeat visits. By clicking “Accept”, you consent to the use of ALL the cookies.
Cookie settingsACCEPT
Manage consent

This website uses cookies to improve your experience while you navigate through the website. Out of these, the cookies that are categorized as necessary are stored on your browser as they are essential for the working of basic functionalities of the website. We also use third-party cookies that help us analyze and understand how you use this website. These cookies will be stored in your browser only with your consent. You also have the option to opt-out of these cookies. But opting out of some of these cookies may affect your browsing experience.
Necessary Always Enabled
Necessary cookies are absolutely essential for the website to function properly. These cookies ensure basic functionalities and security features of the website, anonymously.
Functional
Functional cookies help to perform certain functionalities like sharing the content of the website on social media platforms, collect feedbacks, and other third-party features.
Performance
Performance cookies are used to understand and analyze the key performance indexes of the website which helps in delivering a better user experience for the visitors.
Analytics
Analytical cookies are used to understand how visitors interact with the website. These cookies help provide information on metrics the number of visitors, bounce rate, traffic source, etc.
Advertisement
Advertisement cookies are used to provide visitors with relevant ads and marketing campaigns. These cookies track visitors across websites and collect information to provide customized ads.
Others
Other uncategorized cookies are those that are being analyzed and have not been classified into a category as yet.
SAVE & ACCEPT